Dengue haemorrhagic fever, caused by the dengue virus belonging to the flavivirus group, the family Flaviviridae with 4 serotypes DEN-1, DEN-2, DEN-3 and DEN-4, is transmitted to humans burning mosquitoes females (Aedes aegypti). This mosquito circulates in tropical and subtropical regions. It is often referred to as gnats, which lay mainly in the environment near the house and where they are preferred: jars, pots, pans … containing water placed in the house or objects outside the house.

house, such as gutters, interstitial leaves, bamboo pipes, broken tires, cans, bonsai pots …; all of these types of tools usually contain relatively clear water. The behavior of this mosquito consists mainly of burning human and animal blood in the morning or afternoon. This task is performed by female mosquitoes. When female Aedes aegypti mosquitoes suck the blood of patients infected with the dengue virus, she is infected with the virus. 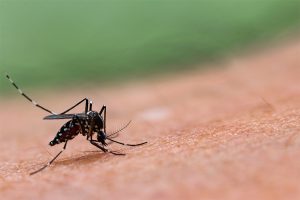 After that, she will lay eggs, the eggs usually hatch into larvae after 2-3 days, the larval stage lasts about 4 to 7 days, the pupa period lasts about 1-3 days; during the whole time, from eggs to pupae, pupae develop in the best conditions to become adult mosquitoes and take about 7 to 13 days. After about a week, this mosquito can transmit the virus when it burns a healthy person. Female mosquitoes can fly up to 400 meters to find water reservoirs to lay their eggs, but they usually stay at home.

Aedes aegypti has evolved to become an intermittent blood sucking species and prefers to burn many people during blood sucking. This mechanism makes this mosquito capable of causing severe epidemics.

Vietnam is considered a local traffic area, mainly in the southern and south-central provinces. The disease often appears and causes epidemics in the rainy season, the average monthly high temperature: in the south, it is almost all the year; in the north, from July to November.

According to statistics published by the Ho Chi Minh City Public Health Institute, the annual incidence rate over the past 10 years ranged from 40 to 310 cases per 100,000 inhabitants, of which in the south regularly representing more than 70 % of new cases; the mortality rate may be greater than 1 in 100,000 people, however, in recent years, Vietnam has often maintained low or very low levels, ranging from 0.1 to 0.01 / 100,000 people.

Currently, due to climate change, the disease reappears and circulates in the summer from May. In the summer, sudden thunderstorms often create new bodies of water that allow mosquitoes to lay their eggs, reproduce and thrive outside traditional places; As a result, the density of infectious mosquitoes is also increased to assume the role of disease transmission that makes available outbreaks of local viral pathogens.

In addition, in some places, especially in the central region due to warm weather, people often install systems to spray water into small droplets of dew flying over corrugated iron roofs to cool in low areas. and the troughs clogged, the mosquitoes will also be able to spread their eggs.

At the same time, people often use water tanks to pump water up and down to use it through pipes; ; if the water tank does not have an airtight lid, the infected mosquito can still fly there to lay its eggs.

In addition, scientists are studying other factors and conditions to determine why dengue hemorrhagic fever occurred, developed, and increased in summer, but not at the beginning of the rainy season according to the rules.

When the above signs appear, the patient should immediately seek medical attention for diagnosis and treatment. There is currently no vaccine or special treatment for dengue haemorrhagic fever.

Patients must drink plenty of water but do not take painkillers without consulting your doctor as this may increase your risk of bleeding.

People who have recovered after being infected with a dengue strain will remain immune to the strain for life. However, they can still be infected with other viral strains and progress to severe dengue haemorrhagic fever.

People infected with the dengue virus can transmit the virus through an Aedes mosquito host after the onset of the first symptoms (within 4-5 days, at most 12 days). As a precaution, patients can take steps to limit the spread of the disease by sleeping under impregnated insecticide nets, especially during fever.

Protecting against mosquito bites is the most effective way to prevent disease by reducing open skin for mosquito bites: wear long pants, long sleeves and anti-mosquito creams (containing DEET, IR3535 or Icaridin) choose the most feasible.

The use of curtains for doors and windows and air conditioning reduces the risk of mosquito introduction into the home and burns all members of the family.

Mosquito nets (and / or insecticide-treated mosquito nets) are also an additional measure to prevent mosquito bites during daytime sleep or to avoid being burned by other mosquitoes during nighttime sleep (mosquitoes transmit malaria).

Indoor insect sprays, mosquito sprays, or other insecticide sprays can all reduce mosquito bites. Tools containing rainwater or running water must be properly sealed or removed.

If the necessary water tanks can not be removed, wash them thoroughly (to eliminate mosquito eggs) at least once a week. This will prevent eggs / larvae / nymphs from developing into adult mosquitoes.

If each family tries to reduce the vector density of transmission, the transmission rate would decrease or even end. Let’s do the message together: “No mosquito larva, no Dengue hemorrhagic fever”./.